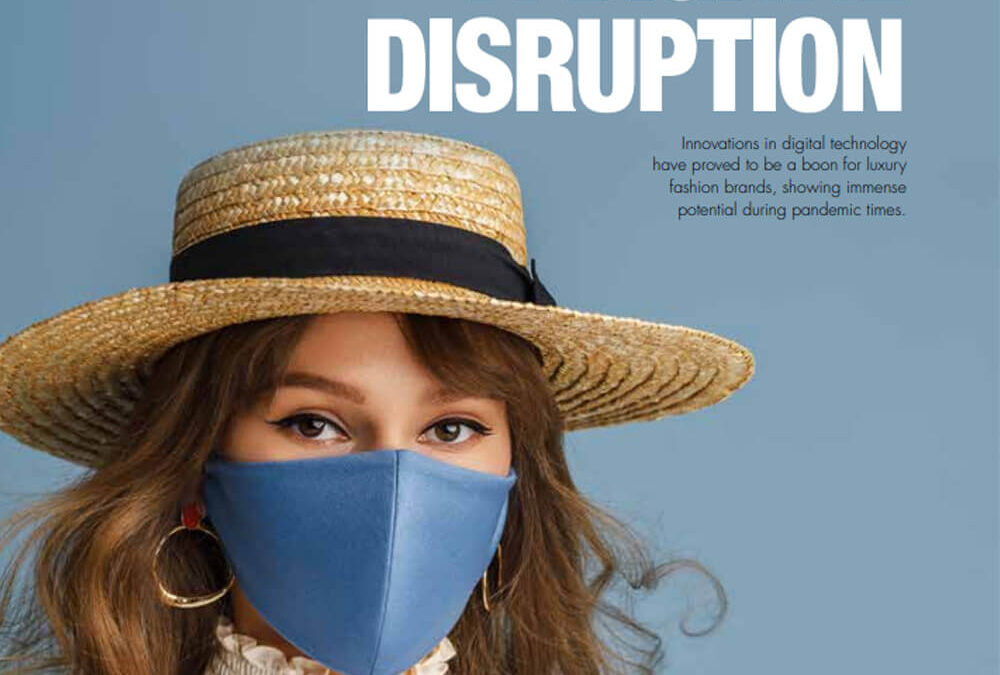 Innovations in digital technology have proved to be a boon for luxury fashion brands, showing immense potential during pandemic times.

The digital world has intertwined with our real world! But how? From an Alexa or a Siri giving company to lonely hearts, a music app advising us on what music to listen to and when, a google map showing us the shortest and fastest route to anywhere, our lives are completely directed and controlled by digital technology. In fact, our socialising has also become virtual.

Artificial intelligence (AI) seems to be giving our minds a well-deserved rest or perhaps making us a slave. And a lazy one at that! Digital disruption is for real; no business or human life is unaffected by that. The pandemic last year has simply accelerated the process. From robots replacing human staff, intelligent software replacing merchandising, and drones delivering our merchandise, will human touch be the new luxury?

Where did it all begin? From a hesitant acceptor of the digital medium to a digital innovation leader today, luxury brands have come a long way. Innovative solutions came with evolution: AI, Internet of Things (IoT), virtual reality (VR), augmented reality (AR), blockchain, 3D printing and mobile commerce. These terms have become a crucial part of the fashion and luxury industry currently experiencing significant transformations.

Historically speaking, early technologies in fashion started to develop in the 19th century. The initial mechanical sewing machines used in garment factories found its way into homes by 1889. By 1905, the electrically-powered sewing machine was in wide use. It was only in 1978 that the first computer-controlled sewing machine was put into use.

By 1960, the world had access to 3D CAD. It was only around 2010 that designers started to use 3D printing in shows. The wow-effect was declared in 2010 when Iris van Herpen presented a collection of 3D dresses during the Amsterdam Fashion Week.

If words like AI, 3D, VR/AR were extremely rare then, today almost every eminent designer wants to incorporate a part of it into its collection. Brand managers are competing in using advanced technologies.

Back in the 1970s, online platforms were not available. In 1997, after a successful fashion show by Donna Karan, when a few journalists suggested to upload the photographs on the net, the designer rejected the request. The launch of the first luxury fashion retail ecommerce store called Net-a-porter in 2000 began to transform the front end of luxury retail.

Likewise, the first use of robotics in fashion was displayed by Alexander McQueen in 1999. The idea was to surround a model in a white McQueen’s dress with two robots that spray painted the dress during the fashion show.

Then there was the Burberry digital revolution, which completely changed a vector of the industry and made the brand a market leader and a pioneer in digital communications. It was in 2006 when Burberry’s chief executive officer (CEO) Angela Ahrendts faced the challenge of fading identity of this iconic brand, which was once well known for its fancy trench coats. To bring back control on designs, Ahrendts first appointed a brand czar, Christopher Bailey, a technoenthusiast who hired people from gaming companies and coders along with traditional designers. They figured that to talk to these 20-somethings, they needed to communicate in their language and that language was digital. They declared that they wanted Burberry to become ‘the first fully digital luxury company’. The brand started the transformation with the idea to make an online experience identical to an offline channel. It was the first to offer online videos and live streaming as well as the first to create ‘Burberry Retail Theatre’ in 2011, allowing customers to buy goods directly from the catwalk.

Burberry continues its digital leadership in luxury to date. They are the first ones to have opened the luxury sector’s first social commerce store in Shenzhen, China. The new 5,800-square-foot store, launched in September 2020, allows customers to access content and personalized experiences and share those online.

Thanks to the Gear VR headset by Samsung, Tommy Hilfiger in 2014 became a pioneer in offering customers the scope to be a part of their ‘2015 Fall Hilfiger Collection’ through virtual reality (VR). It offered an opportunity to immerse its customers with exclusive moments of fashion in 360 degrees.

Next, in 2017 the brand Coach made possible the use of VR in its US shops, which provided full access to their shows with a stereoscopic sound.

Additionally, the world of fashion has been actively using augmented reality (AR). This helped increase sales and improved experience proposed to the consumer. The first luxury brand that allowed buyers to try products through a front-facing camera and choose the right colour and shade was LVMH’s Sephora. This innovative solution did not only allow trial of various make-ups through introducing virtual artist, but also led to higher revenues.

The rapid development of the fashion and luxury industry led to the appearance of block chain technologies that are offering transparency and traceability for companies and its customers. Block chain helps protect intellectual property rights in the world of ecommerce. The first luxury players to adopt this technology were LVMH (2017) and the Swiss luxury watch brand Vacheron Constantin (2019).

At the front end, Dolce & Gabbana replaced its usual parade of millennial models with drones, which whizzed and hovered down the runway carrying Fall 2018 handbags. While now these wonderful technologies play a vital role in the business cycle of any luxury brand, in reality just about seven years ago, none of these was able to proceed beyond the basic conceptual framework. The House of Hermes recently announced that online shopping brings on 80 per cent more profit than their boutique in Paris on 24 rue du Faubourg Saint Honoré. Additionally, the CEO of Gucci Marco Bizarri in a 2019 report highlighted that around 40 per cent of Gucci’s goods could be automated. This definitely could lead to the decrease of high-skilled labour force and costs that can play a trick with the brand in the future.

Just imagine, based on data from yesterday, AI can analyse the data of tomorrow. In general, analysing fashion trends is not an easy task. One can never be sure and blindly trust AI data in predicting the trends. However, predictive analytics is helping consumers make the right choice with respect to the correct combination of colours, styles suited to their personality and preferences. Additionally, AI-based start-ups like Dress-fit allow designers to sell 3D clothes. A 3D avatar is becoming a reality wherein a customer could create his or her own avatar and dress him with clothes he could like. These 3D avatars can enter the favoured games developed by luxury brands like Ralph Lauren and Gucci. A virtual trial room can assist in choosing the perfect fit based on the 3D avatar.

Last year accelerated the adoption of digital technologies by luxury brands. In fact, with the help of innovative technologies and solutions, the fashion and luxury industry survived the lockdowns. Virtual store walks using zoom or other video-based technologies; distance selling; on demand live streaming and virtual assistants have been ensuring that a brand is able to service its clientele in more ways than one. The industry reoriented its business models to online sales and accelerated digitalisation to ensure more sustainable development with the active use of information and communication technologies. Everything changed in 2020. VR shows have become a reality for luxury brands like Prada, Tissot and Hugo Boss due to pandemic-induced lockdowns.

However, virtual fashion weeks couldn’t fully replace offline. Perhaps, they could become an additional tool of communication as well as foster the development of the digital era. There is no denying the fact that we are dealing with a digital disruption or even revolution. At the same time, it is hard to imagine VR replacing the aroma, feel, touch and experience of a glass of champagne while sitting on a velvet soft sofa in a boutique while choosing a scarf.

It is all about a unique experience, attitude and understanding of the customer that the luxury industry has been building for decades. Nevertheless, these new tools are developing and trying to transform the impossible to understandable, acceptable and incredible. Surely, the future of luxury is inseparable from technological innovations. This bond no doubt has immense potential.

Abhay Gupta, a certified Marshall Goldsmith coach, is the founder, promoter and CEO of Luxury Connect (a boutique consulting organization) and Luxury Connect Business School (LCBS). Author of The Incredible Indian Luxury Bazaar, he has helped establish luxury brands like Versace, Versace Home, Versace Collection, Corneliani, Arredo Classic, etc in India. Luxury publication Blackbook recognizes him as one of the ‘Top 100 Indian Luxury’s Most Influential’ for the past 6 years. He is also a recipient of the ‘Luxury Retail Icon 2012’ title by Asia Retail Congress. Having being featured in Forbes Luxury Trend Report 2012 as one of the industry leaders, he has also been widely recognized as a luxury expert by many media organisations. Fondazione Altagama has also recognized his contribution to the growth of Italian luxury industry by his pioneering efforts in India.